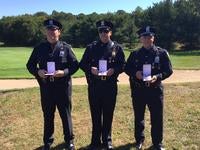 Yale Police Officers, Daniel Cavanaugh, Danny Sentementes and Sergeant Christopher Halstead, received the Medal of Valor Award from the Connecticut Police Chiefs Association (CPCA) at their annual fall meeting. They received this medal for their brave, calm and competent response during the pursuit and arrest of an armed and fleeing suspect who was hiding within a large crowd of people. This incident happened last July. The officers were able to catch the person and retrieve his loaded gun without incident.

This award recognizes police officers who distinguish themselves by extraordinary acts of heroism, in a single event, where bravery and/or self-sacrifice is clearly demonstrated, under life-threatening circumstances with imminent threats to personal safety.

Each year for the past 20 years, the CPCA has given this medal to one officer (in this case three for their combined efforts in the arrest).  The officer(s) are nominated by their chief for acts of bravery that have happened in the prior year.  All nominations are submitted to a selection committee who reviews the information and makes the final choice.  This is the second year in a row that officers from the Yale PD have received this honor and the second medal for Officer Sentementes.  Last year Sergeant Roosevelt Martinez and Officers Danny Sentementes and Thomas Nguyen, were awarded the 2015 CPCA Medal of Valor for saving a person’s life.