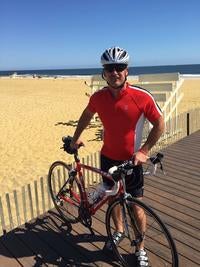 Every story about doing something epic usually begins with the phrase “a friend of a friend …”  The same applies to Yale Police Officer Joseph Funaro who, in September, participated in the Tour De Force 9/11 Memorial Bike Ride. It was Funaro’s first time doing a multi-day, long-distance, charity road ride. The Tour De Force is an annual bike ride, started in 2002, in memory of the police officers and first responders who died trying to save others during the terrorist attacks on September 11, 2001. Riders also fundraise for families of police officers killed in the line of duty, nationwide. “I didn’t know anything about it. A friend of a friend, Greg Swanson, approached me at the gym and asked me to do it with him,” said Funaro.

Over the course of four days and along with almost 230 other riders, Funaro rode over 290 miles through four 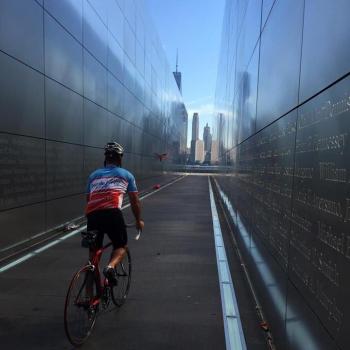 states and raised $2,200. “The first day was the toughest at 102 miles with a head wind,” said Funaro. The 2016 Tour De Force started in Washington D.C. by the Supreme Court Building and ended in New York City at Ground Zero. The ride attracts police, fire and EMTs from across the US.  “The whole ride was very emotional for me, there’s a lot of pressure on police officers.  I can appreciate the job the police do and the sacrifices that they make trying to keep our community safe,” said Funaro.  While he wasn’t nervous about doing the ride, Funaro still had to prepare for being on a bike and pedaling long distances over several days.

To train for this ride Funaro, who has a biking beat at Yale, starting riding two days a week about 30 miles each trip.  “I enjoy riding, but had to dust off my road bike and start really training.” Throughout the summer he trained with Greg Swanson and during the four days of the event they rode together.  Like most organized charity bike rides it’s rain or shine.  Luckily for Funaro and his fellow riders, they had four days of beautiful, sunny weather.  Day three involved taking the Cape May Ferry to New Jersey, then riding all along the shore. “Riding in New Jersey was my favorite, we left from Atlantic City and rode all along the shore with a tail wind; I averaged 24 MPH that day,” said Funaro. It is not a race and riders go at their own pace.

Each day the ride was led by the police department in the host town.  For security purposes, riders didn’t know the route until the day before.  So it was bit of a surprise where they would be riding each day and each year the route is different. On the last day, they received an escort from the New York City Motorcycle Unit from the 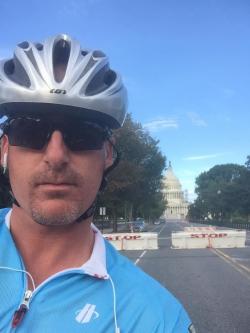 George Washington Bridge to Battery Park. “The whole experience was just incredible. I met officers from all over the country. But the most emotional part of the ride form was having a moment of silence at Ground Zero” said Funaro.

Officer Funaro plans on doing the ride again next year.  “It’s a worthy cause and I want to raise more money in 2017 and maybe do it faster, I’m a little competitive,” said Funaro.   Almost $300,000 raised from this ride will be given to the families of fallen police officers throughout the US.