It was a Happy Thanksgiving for 287 New Haven families thanks to the efforts of several Yale (YPD) and New Haven Police Department (NHPD) volunteers. Last week this combined team of officers and civilian volunteers gave away 287 turkeys to Newhallville residents.  Under the stewardship of YPD Officer Martin Parker, Jr. almost 1,100 people had a turkey dinner this holiday season.

For the past month, Officer Parker worked closely with many volunteers from the YPD and NHPD to collect over $5,100 in donations and then buy 287 turkeys and trimmings for 50 dinners. The donations came from officers, local businesses, New Haven residents, and Yale employees. This was truly a community effort. 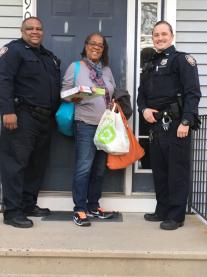 To find out which families had the greatest need, Officer Parker worked with members of the Lincoln Bassett and Highville Schools.  Those 50 families received all of the elements of a full Thanksgiving meal, including cranberry sauce, potatoes, stuffing and a pumpkin pie. Martin got help from Bob Potter, owner of Prime 16 Restaurant on Temple Street, who assisted in procuring the turkeys for a discounted price.  Potter also donated 50 pies. 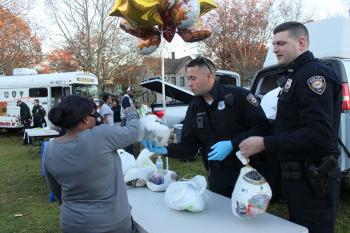 Officer Parker and other YPD volunteers worked with members of the Lincoln Bassett School to get the word out to the neighborhood. In addition, they even went door to door handing out flyers about the turkey giveaway which was held in the school’s playground.  Several hundred people from the Newhallville neighborhood lined up and patiently waited as the many volunteers prepared to hand out the frozen turkeys, pumpkin pies and other trimmings—including 50 lbs. of potatoes!  It took all of 16 minutes for the officers to give away all of the turkeys.  There was also a small contingent of officers who delivered the turkeys directly to the homes of an additional 30 needy families in the area. 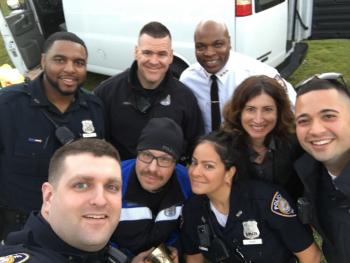 “This Thanksgiving we were able to accomplish a monumental achievement. As I sit back and think about all the people we were able to help feed this Thanksgiving, I cannot help but smile,” said Parker.  Chief Higgins, also in attendance, was beaming with pride at his staff, who as they handed out turkeys wished everyone a hearty “Happy Thanksgiving.”  “I’m very proud of all the YPD officers and especially those who came out today to help individuals and families who are less fortunate. You hire good people and magical things happen, like this,” said Higgins.

Special thanks to the following individuals from the Yale Police department who volunteered their time to help in the huge endeavor: