Did you know about Yale Relocation and Logistics Management? 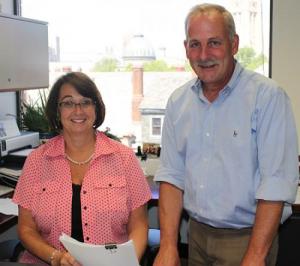 The tiny department of Yale Relocation and Logistics Management (YR&LM) consists of dynamic duo Diane Brown and Tom Schmidt with adm support from Carol Boyd. They work with various Yale departments to move items like rocks, skulls, priceless works of art, Henry Kissinger’s papers, and even, entire households!  But please don’t ask them to move your dog.

In a nutshell, YR&LM is the Yale community’s resource for all ground, air and ocean transportation, including faculty and staﬀ households, lab and oﬃce relocations, counseling services for importing and exporting, and liaison with the U. S. Customs Service.

Diane and Tom have over 50 years of combined relocation and logistics experience.  Diane, who started at Yale Procurement in 1 987, became the backbone of this niche department 25 years ago after a few retirements and a department reorganization.  “Back then, I mostly did local moves and managed the motor pool,” said Diane.  The motor pool was an early car-sharing program that involved clipboards and a car/key honor system that was by all accounts successful.  Tom, who joined the team in 2 013, has worked in the shipping and moving business since the 70’s and at one point owned his own company,

In 1 992, Diane was promoted to managing interstate household and lab relocations.  “That happened not long after I got back from maternity leave,” she continued.  For the next 21 years, Diane was the one and only go-to person in what was then called the Transportation Department, which handled 75 to 100 moves a year.  “They were mostly faculty and doctors coming to the University. I moved their households, labs, you name it.  We, of course, do not make travel arrangements for people nor do we move their pets,” said Brown.  She also stressed that this service is for folks with department-approved relocation allowances.

Recently renamed Relocation and Logistics Management, the department now handles over 250 moves a year.  That gradual yet steady increase in moves necessitated second staﬀ member Tom. (He also assists out at West Campus organizing and recycling items in its large warehouse).

And while Diane and Tom can’t move everyone at Yale, this is how the process works:  a job oﬀer letter from Yale to a new hire may include a relocation allowance and YR&LM’s phone number.  Diane or Tom talk to the new hire, gather information and send a representative from one of the moving companies to do an on-site visual estimate.  YR&LM has university-approved contracts with major moving companies.  “It doesn’t matter if the individuals live in California or France, we have agents worldwide,” said Brown. After the estimate, Diane and Tom work closely with the new hires and recommend how to save money, address the dos and don’ts of moving (never leave the movers in your home without supervision!), and advise them to set dates directly with the movers.  Notes Brown: “Sometimes people are a bit overwhelmed when moving. One time a person unplugged his refrigerator with food in it several days prior to the move.  The smell was quite overwhelming by the time the movers got there and delayed the move a few days. Other times, folks have had enormous plants they want moved and movers don’t usually move plants. But we had one mover agree to move these six-foot-tall bushes. They got them out and down narrow stairs without dropping any soil.”

YR&LM also handles importing and exporting of international freight. For a university, this can include artifacts like pottery from archeological digs, animal specimens, and even dirt and rocks.  Faculty will box up the materials and contact YR&LM to have the shipment picked up — sometimes from very remote areas like the rain forests of South America or Taizhou City, China.  Either way it is always Diane and Tom on the other end of the phone working their magic to get the goods to an airport, then through customs and then to New Haven—sometimes hiring cranes and ﬂatbeds along the way.

When shipping items overseas, Diane and Tom pay close attention to details like making sure the wooden crates are heat treated or assuring that the shipment won’t be released to ship or ﬂy because of possible bug infestation.  Also, they counsel the scientists or researchers on how to ﬁll out the various forms that must go with their oftentimes unusual cargo. Today, YR&LM uses customs brokers. Twenty years ago all customs paperwork was mailed in; now it’s all automated, making it easier to use brokers to clear the shipments through customs.

Why should you use their services?

When Diane and Tom aren’t booking moves, they are looking out for the university’s bottom line.  They carefully review bids and invoices, sometimes catching errors and helping out with claims.  They can save departments money on household moves because of discounted rates through approved vendors and shorter delivery spread dates (an industry term that means shorter pickup times through contracted arrangements).  Departments and new hires using YR&LM get personalized service.

“We are always innovating when it comes to national or local moves.  With freight we bring our expertise to arrange shipments, give advice and the best recommendations for cost-eﬀective shipping and moving,” said Team YR&LM.