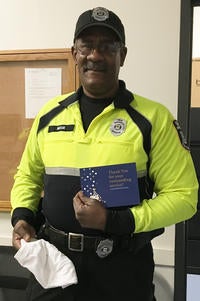 Yale Security Officer Ken Nixon was walking his beat one recent evening when he saw someone get robbed. He immediately called in the incident into the police, described what the three individuals looked like, what direction they had headed and then helped to calm and reassure the victim.  Because of his prompt actions assisted the Yale Police in arresting the 3 individuals.

He was commended by the Yale PD for his quick actions.  Ken was also recently surprised with an #outofthebluethanks during 3rd shift roll call. He received a thank you card and gift during the mini ceremony.  Big thanks to Ken for keeping a cool head in a tense situation!