Mike Rivera Receives Thanks for His Kindness, Patience & Diligence 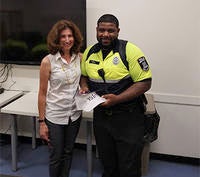 Michael Rivera is a patient person. He is also quiet and kind. Those qualities came in handy one late, late evening when responding to an urgent call from a student who had lost her keys. The young woman had been attending a concert at Sprague Hall and didn’t realize her keys were missing it until she got home after midnight.  After she called for help, Yale Dispatch sent a security officer, Mike, over to help her search for the keys. It was a bit stressful given the time of night, that Sprague was now locked and keys had to be retrived to reopen it. And even after she and Mike scoured the aisles of the music hall, the keys remained missing.  Through it all Mike kept calm and patiently kept talking, trying to keep her calm while they searched.

The next day she found her keys and wanted to immediately call Mike tell him and again thank him–she kept thanking him throughout the search and apologizing for as she said “making him the victim of my stupidity.”  So instead she wrote a wonderful letter describing what happened, saying “I just wanted to thank him for being so kind, calm and generally wonderful to me in what was a very stressful situation.” Not only did she thank Mike but she mentioned all the security officers she has “interacted with this past year have been so friendly and helpful.”

Yale Security and Mike sincerely appreciate her taking a moment to recognize outstanding service. Mike thanks for being a great human being!