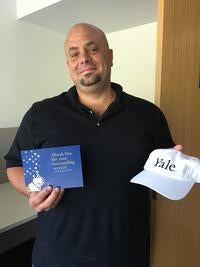 It was just another day for Brian Pagan, Yale Security Access Technician, when a slightly frantic call came in from the Department of Anthropology about an after hours event. The caller said the department’s front doors needed to be opened or unlocked after 5 p.m. to accommodate this event and she had just been notified.  It was just around 5 p.m. when she called Yale Access Control, and she was greatly relieved that someone was able to green light the doors within minutes.  Normally, Yale Security requires 24-hours notice for these types of requests.

Not long after, the staff member took the time to write a thank you note expressing her gratitude.  It stated that Brian was “so professional, saving the day and that the Security Access Control staff are always prompt and efficient” whether it is a routine or urgent request.

Brian was surprised at his desk with a thank you note and gift.  It coincidentially was during the week of his 5-year anniversary at Yale. Congrats all around Brian!