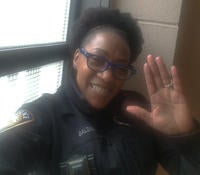 Kudos to Officer Demetra Baldwin on a job well done. We recently received a thank you note from a grateful Yale alumnus about Officer Baldwin and the Yale PD.  Read more.

In the note, Mrs. Sammons mentioned getting assistance from Officer Baldwin after a minor car accident in the Yale Health garage.

“Officer Baldwin came to the scene and was extraordinarily helpful to us. She told us what we needed to do, called the tow truck, and oversaw the towing of the car. We were a little rattled by the incident, but Officer Baldwin’s friendly and competent manner was a great support.”

Mrs. Sammons, who had worked at the Beinecke Library before retiring, was also helped by the Yale Police when she was a graduate student in the 1960s.

“One again I have reason to be personally grateful to the Yale Police. Back in December 1965, when I was a Yale graduate student, two Yale police officers rescued me from an armed assailant who attacked me on the Cross Campus.”

In September the Yale PD turns 124 years old. This letter shows that we continue to provide excellent service to our community. I’m proud of our strong history of service and want to thank Officer Baldwin for keeping up that tradition.