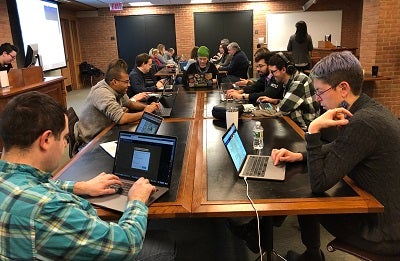 IT recently helped support a digital humanities project at the Haas Arts Library while having a blast! Dan Powell had previously participated in a “transcribe-a-thon” event for a crowdsourced transcription project, Ensemble@Yale, a joint effort between the Digital Humanities Laboratory and the Haas Arts Library at Yale University Library.

According to their website, “Ensemble@Yale, inspired by the original Ensemble project from NYPL Labs, is an experiment that aims to transform historic programs from Yale’s archives into searchable text through crowdsourced transcription. Rather than reproducing all of the words in a digitized document, as with optical character recognition (OCR), crowdsourced transcription relies on human judgment to pull out features of interest to scholars and create structured data.”

Recognizing the project as an engaging way to connect with the cultural heritage efforts of Yale, Dan invited Lisa Sawin to a friendly team competition related to this project. Lisa jumped at the opportunity to participate, and accepted the challenge. Together, they used the Ensemble project’s website to review playbills from the first half of the twentieth century. Using an interface based on the Scribe.io tool, they first marked essential information like title, director, actors, and production staff. They then transcribed this information, contributing their efforts towards a future database that will allow researchers to identify relationships and draw connections from this trove of Yale history. 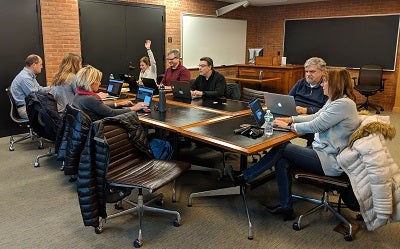 The competition ended with a trivia contest with questions covering Tony-Award-winning Yale alumni, current productions at Yale Rep, and performances long past. The teams adjourned to Mory’s when the competition was over to celebrate a fun and productive afternoon.

Interested in helping with this fantastic project? Anyone can try their hand at marking and transcribing historic programs on the Ensemble@Yale website. Interested teams can contact Lindsay King, associate director for Access and Research Services at the Haas Family Arts Library to schedule a group activity in support of the project.