“You have chosen to eat a lot of red meat. If the whole world ate like you, we would emit fourteen hundred gigatons of carbon dioxide per year…”. Or so you would learn by playing the Feed Stampede experiences created during the Reality of Global Climate Change mixed reality hackathon. Feed Stampede, Hotline, and City of Trees were just three of the experiences created during the second annual weekend hackathon event, held two weeks ago. Technical mentor, Max Payson, enthused at the end, “This is the best hackathon I’ve ever experienced!” The small, intimate scale of the event, strong support, and critical theme all made for a good experience for everyone involved. 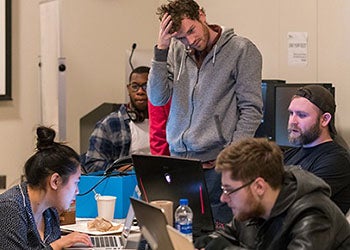 The 50 registered participants were provided with data sets detailing facts related to the impacts of climate change and access to augmented reality (AR) and virtual reality (VR) technologies. AR and VR experiences can be grouped under the broader term of mixed reality (XR). Aided by a team of mentors, participants had 24 hours to develop an idea, devise a plan, and build a prototype of a mixed reality experience that communicated these facts in an effective way.

Yale’s Center for Collaborative Arts and Media’s (CCAM) facilities at 149 York Street provided the ideal setting for the event. CCAM has six permanent VR work spaces, with additional mobile units that were set up for the hackathon. It also has digital workstations, motion capture, audio recording, and other tools which the teams put to good use. Technical and climate change mentors were on hand to work with the teams. These included staff and faculty from participating Yale groups as well as staff from The Nature Conservancy and SphereGen. Technical partners provided guidance and use of their respective tools: ESRI, for ArcGIS and CityEngine geo mapping tools, and Magic Leap, for their AR headset. 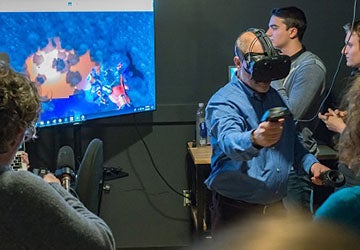 Winning projects were selected in three areas with one overall winner:

The player is presented with a city environment with gradually worsening climate factors. The player collects seeds and plants them. As the tree coverage grows, the climate factors improve.

The player selects a meal choice and takes it to their table. Outside the window, they see a verdant landscape that changes based on their food selection. A narrator spells out the statistical impacts of their meal while the verdant landscape alters in kind.

The event was made possible through the contributions and hard work of our campus partners, sponsors, and advisory committee. Yale organizers included: Yale Center for Business and the Environment, Yale Center for Collaborative Arts and Media, Yale Program on Climate Change Communication, Center for Ecosystems in Architecture at Yale, Data-Driven Yale, Information Technology Services, and TSAI Center for Innovative Thinking at Yale.

Many thanks to all of our participants and to everyone who helped to make this event a success!

For details on the event, visit Reality of Global Climate Change: A Mixed-Reality Hackathon