Did you know about Stephen Schwarzman? 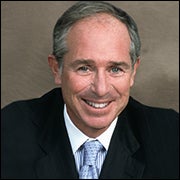 Stephen A. Schwarzman, Yale College Class of 1969, is the man for whom the newly renovated Schwarzman Center is named. Mr. Schwarzman began his career working for Donaldson, Lufkin, & Jenrette, a private investment bank based in New York City.  After business school, he began working at Lehman Brothers where he became a managing director at just 31 years old. In 1985, he and his boss at the time Peter Peterson formed The Blackstone Group. The company was initially formed to focus on corporate mergers and acquisitions however, it morphed overtime into an alternative asset management and financial services-based firm.

Apart from his impressive career, Mr. Schwarzman is a generous philanthropist. In addition to his donation of $150 million dollars to Yale to renovate the Commons Dining & Memorial Halls, he’s donated $100 million for expansion of the New York City Public Library, $100 million to endow a scholarship program in China (named the Schwarzman Scholars),  $25 million to his High School (Abington in Philadelphia), $250 Million to the Massachusetts Institute of Technology, and £100 Million to Oxford to establish the Schwarzman Centre for Humanities. His generous gifts over the years have helped tens of thousands (if not more) of people better themselves.