Yale’s Class of 1964 recently recognized Officer Tristan Kiekel for her community service, inviting her to an alumni dinner held in February at the New Haven Lawn Club. They also surprised Kiekel with a plaque commending her and making her an honorary member of their class.

Tristan has been a Yale Police Officer since 2008. 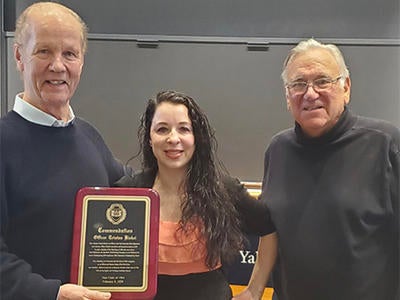 Throughout her career, she has been active in the community. For the past several years, she has been aiding Charlie Johnston a Yale Alumni who lives locally and is a member of the class of ‘64. She has helped walk his two dogs, shared pizza dinners, and checked on him weekly. At 78, he has no living family members.

In addition to helping Mr. Johnston during a recent illness, Tristan also stepped in when his dog became ill and needed surgery. Besides helping with trips to the vet, she fundraised to help pay for the vet bills. Members of the Class of 1964 heard about her efforts and wanted to recognize her. The plaque states that Tristan is “an officer and human being of the first order.”

Tristan had no idea she was being honored. “It was unexpected, but one of the most rewarding moments of my career. I look forward to meeting up with the class of ’64 and hope we can accomplish more things together to make the community and world a better place,” said Officer Kiekel.

During the ceremony, they also thanked the entire Yale Police Department for their continued support of community efforts and for encouraging their officers to get involved beyond regular duty.