The Yale Camp at Great Mountain Forest is in the Litchfield Hills of northwest Connecticut. Deeded to Yale in 1940, it sits on eight acres in the middle of the 6,000+ acre Great Mountain Forest.* Since 1941, the Yale School of the Environment (YSE) has used the camp for field training and summer programs, including orientation for incoming graduate students.

The camp’s lodge and cabins had, for many years, been powered by a propane generator. A project study found the generator was at end-of-life and suggested upgrades that included adding outlets and lights. The goal was to install an independent power source. Yale Facilities focused on designing and installing a solar system to meet these needs and mainly power the lodge, which houses a kitchen and several meeting rooms. 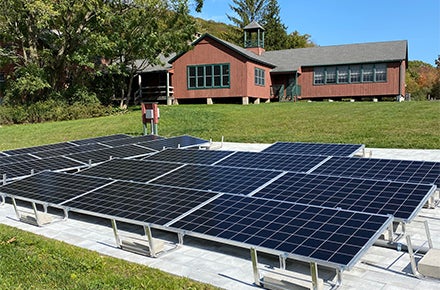 Leadership at YSE wanted to focus on energy conservation, and with a solar system on-site, they could easily demonstrate where the energy comes from to students and visitors. “People now get a tour of how this new system works and how much power it generates,” says Mark Veroneau, Associate Project Manager. “Soon we will install signage explaining how the energy is created and used.”

After a review and the initial design, the Facilities’ team hired Energy Resources of Thomaston, CT, to design and build the solar array system. In an open field, near the lodge, a series of solar panels were installed to collect sunlight. They are angled to align with the arc of the sun for maximum exposure. The array powers a small bank of batteries located in the basement of the camp’s lodge. These solar-grade batteries can store enough energy to last 36 hours. If the batteries run down, there is still a generator on-site that kicks in automatically. Since the camp is open only during the summer and fall, the goal is not to use the generator.

“This unique project was essentially a contractor design/build because their system was in alignment with what we wanted,” adds Mark. “Our Yale Engineering Group reviewed the plan and confirmed everything would work. Often, the contractors offer valuable information and create a better system because they do this every day.”

Though the project was delayed slightly by COVID-related closures and supply-chain issues , it was completed at the end of September. YSE hopes to have a ribbon-cutting ceremony in October, before the winter. The camp closes in late fall, and in addition to being home to lots of wildlife, including black bears, moose, bobcats, porcupines, and raptors, it gets record amounts of snow each winter. In fact, the contractor reported seeing the resident black bear.

“A few times, when I went up there, says Mark, “I had to bring extra layers because it’s at least 10 degrees colder throughout the year. Sadly, I didn’t get to see the bear.”

Come summer of 2021, visitors will have the luxury of this new solar system that will power the kitchen, overhead lights, and outlets for charging handheld devices.

*GMF is owned and managed by The Great Mountain Forest Corporation, a not-for-profit 501© 3 private operating foundation.