Old dogs are the best dogs 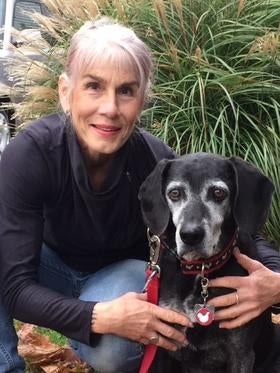 Cletus, a lab mix, is the newest member of a family of six senior dogs who was recently adopted by Jan Zulkeski, senior administrative assistant at Yale’s Department of Genetics. This small black and grey senior, was rescued just a few months ago from a high-kill shelter in Georgia. Apparently, Cletus liked to chase chickens, so his former owner dropped him off at the shelter.  Now, Cletus spends his time playing in the backyard with his adopted siblings, five retired racing greyhounds.

Jan found Cletus through the Yale Yammer group Yale Staff Pets & Rescue Forum that frequently posts profiles of older dogs and cats in need of homes. The Yammer forum was started by Lisa Maloney, communications officer, and has almost 120 members. When Cletus was rescued from the shelter, he was connected with the group Labs4Rescue, based out of Killingworth, CT, which put him up for adoption. After a long trip up from Georgia, and a few overnights with a foster mom in New York, Cletus and Jan met for the first time in April on Easter Sunday.

“Honestly, he just came in like he’d been here all along,” recalls Jan about Cletus’ first time meeting the rest of the family. Although he is “one not like the others,” as Jan refers to him, Cletus quickly made himself at home among the greyhounds. “It took him about 30 seconds to fit in,” Jan adds.

Adopting a dog long distance is a gamble. Deciding on a senior dog, Jan didn’t know what shape he would be in or how long she would have him. But she took a chance anyway. “He is remarkably healthy for an older dog; he’s very spry,” says Jan. When Jan found out Cletus was returned for chasing chickens, her first thought was, “You know Cletus, at your age, good for you that you felt like doing that, that you could do that.” His energy, even at 13 years old, hasn’t faltered and since finding a home with Jan, Cletus has received multiple chicken toys from friends. His custom collar and tag, which reads “KNOT chikken safe,” is also adorned with chickens.

Jan has been adopting only senior dogs since 2009. “They need a place to go for their final chapter and they’re just too often thought of as disposable,” she says. Unlike puppies, older dogs are already house trained and fully grown. You know exactly what you’re getting. But even if you’re not looking for an older dog, “they will just insert themselves into your heart,” says Jan. She never hesitates to suggest to friends, family and co-workers to consider adopting older dogs and following the Yammer Pets Forum. Along with links to AdoptAGreyhound.org and OldDogHaven.org attached at the bottom of all her emails, Jan writes this in every card she gives: ‘Old Dogs are the Best Dogs’. 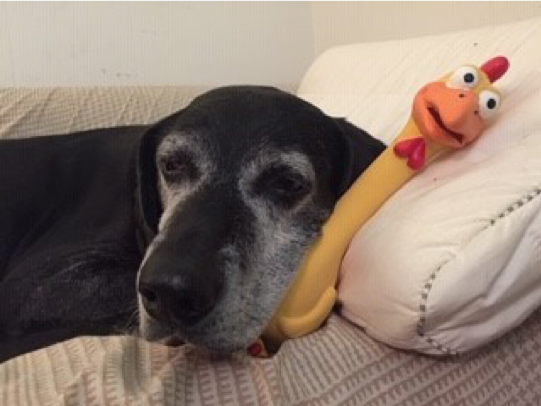 Cletus with one of his chickens