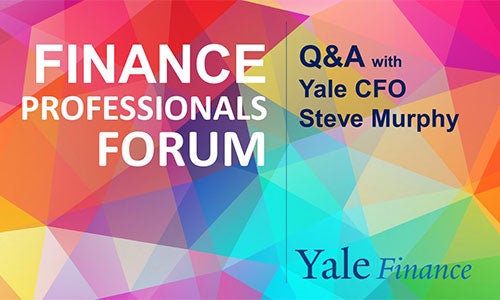 Recently at 25 Science Park, participants of the third quarterly Finance Professionals Forum got a taste of what Yale’s chief financial officer has learned over the years from his many roles in New Haven and beyond. The April 25 event drew 70 people and ended with a sweet surprise.

Steve Murphy, Yale’s vice president for finance and chief financial officer, recalled one of his first jobs as an undergraduate at Yale College, which had one of the first Apple computers. “No one knew what to do with it, so they stuck it on a table, and it just sat there,” he said, but as a computer trainer, he developed skills that gave him an edge. “Whatever job you have, learn as much as you can. You’ll never know what you might gain from it,” he said.

After graduating in 1987, Murphy took a string of finance positions in London, Munich, Hong Kong, and New England, gaining leadership skills and some belly fat, thanks to a stint at Häagen-Dazs, where he directed business development in the Asia-Pacific region. “Yes, the freezers are full of ice cream all day, every day,” he said.

Other career challenges included homesickness, long nights in the office, and occasional battles with ethical dilemmas. Once, after refusing orders to manipulate some client data, Murphy received the lowest rating possible on a performance review. “I didn’t know for about six months what was going to happen,” he said, but when the truth came to light, he received an outstanding achievement award from the company. “Sometimes the right thing to do is hard, and sometimes you don’t even know if you’re going to keep your job or not. That award is on my bookshelf as a reminder.”

“Whatever job you have, learn as much as you can. You’ll never know what you might gain from it.”

In 2001, Murphy returned to Yale to be near family and to pursue more purposeful work, even if that meant taking a pay cut. After Yale was investigated for compliance to federal grant regulations, he was tasked with leading a 100-day plan to raise awareness about the importance of grant compliance issues and to make improvements. “We got a lot done,” he recalled, “but things took much longer than 100 days.” Today, he describes the Workday administrative software project as another “big, tough project.”

In a question-and-answer session that followed, Murphy thanked the many finance employees assisting the Workday effort. “We are four years into it, with amazing people doing amazing work,” he said. “It’s not going to be perfect, but it’s going to be a start, and it will continually improve.” With that, Yale will see improvements to business processes, compliance, and cost savings, he said. Going forward, training and change management will be tremendously important, he added.

Murphy was also asked about ways to continue learning at work. He answered:

At the forum’s conclusion, Murphy surprised participants with Häagen-Dazs ice cream bars—a tasty reminder of the lessons he learned on his journey to, and at, Yale.

The Finance Professionals Forum, which launched in 2016 as part of the Employer of Choice initiative in Yale Finance, will meet again in Fall 2017 after Workday Financials goes live. The forum’s goal is to leverage the knowledge and expertise of Yale Finance employees to help staff meet everyday challenges and strengthen networks.

For more information on the forum, see Yale Finance: Employer of Choice.