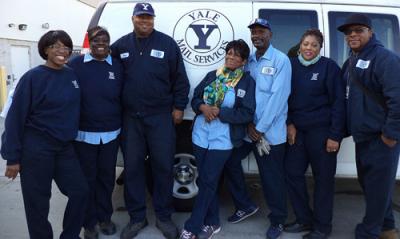 From L to R: Karen Young, Peggy Nelson, Sean McKelvey, Janice Sullivan, Donald Greene, Lynette Holloway, & Will Perry
Benjamin Franklin once said, “In this world nothing can be said to be certain, except death and taxes.” If he ever got the chance to work or study at Yale, he’d have added to that “and daily mail delivery.” Despite rain, snow or other hindrances, the mail must be delivered and Yale Mail Service continues to make that happen, as it has for decades.

For close to a century, Yale University has enjoyed the comfort of knowing that ﬁrst class and inter-oﬃce mail will be delivered on time across the campus. Through the years, Yale Mail Service has been shaped by diﬀerent leaders, mailing trends and new programs.

Yale Station (the United States Postal Service’s downtown hub), located on the corner of Elm and High Streets, has been taking care of students’ ﬁrst class mail and parcels since the early 1 930’s. It is located in Lanman-Wright Hall, which is named after two prominent Yale ﬁgures–the ﬁrst dean of Yale College, Henry Parks Wright and Colonel William K. Lanman of the U. S. Marine Corps, whose family has had ties to Yale since the 18th century.

Yale Mail Service (formerly known as Campus Mail) delivers ﬁrst class mail, packages and inter-campus mail to Yale buildings daily. Since 1 979, when over two million pieces of mail were delivered annually, its home oﬃce has had several diﬀerent locations, and is currently at 344 Winchester Avenue, where presently, approximately one million pieces of mail are delivered annually.

Brainard-Dougan, who remains with Yale University as a Software Administrator in charge of software licensing, ran the mail room from 1 982 through 1 985, where approximately 35,000  pieces of mail were processed weekly.

“Back then, there was still a lot of mail,” Brainard-Dougan said recently when recalling her time in the mail service. “Daily mail was pretty important at that time. We did not have email. A ton of important correspondence was still going through us. It was a busy department.”

Brainard-Dougan’s crew of 12 employees included Sylvester Hopkins, better known as a singer in the Five Satins, an American doo-wop group which was formed in New Haven, Connecticut. After 34 years, Hopkins retired from Yale University in 1 999.

In 1 982 to 1 983, the mail room was at 20 Ashmun Street in a small, cramped, limited-access basement, where space was at a minimum. After mail was brought in through a small driveway, the staﬀ sorted it for the three major routes, encompassing the central, science and medical areas. 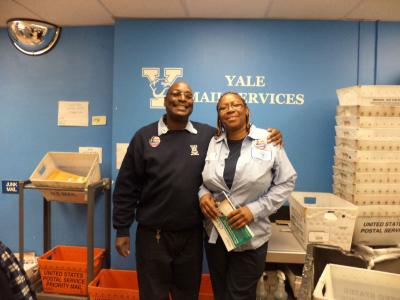 Yale Mail Service staﬀ has been picking up mail from USPS on Brewery Street daily at 6 a. m. since the early 1 980’s. Since that time, letter mail has decreased with the use of email, but package deliveries have more than tripled, due to the ease of online purchasing.

Today, mail and packages are brought to the Medical School and Science Hill areas for drop oﬀ and sorting purposes, as well as the Central Mailroom at 344 Winchester Avenue.

During Brainard-Dougan’s reign from 1 982 to 1 985, the mail room was brought into the world of technology when she purchased the department’s ﬁrst computer. This IBM PC with two ﬂoppy drives and no hard disks, was used primarily for making signature sheets for check pickups and drop oﬀs.

Yale Mail Service moved to 10 Science Park in 1 984. Two years later, in 1 986, under Page’s management there was an increase in mail volume due in part to a growth in the national economy. With the amount of mail stops on the rise by 25%, Page worked with then assistant manager and present Director of Support Services (which includes Mail Service) Don Relihan on mail eﬃciency, including an overhaul of the mail routes to allow for more deliveries but less travel time.

In 1 991, under Walter Holland, the Medical School mail room also continued to grow. From its location at 333 Cedar Street, Holland’s crew of four employees sorted mail and made deliveries to buildings on that side of campus.

Holland’s leadership spanned 14 years. He retired in 2 004 and was replaced by Kim Raseman. Under Raseman, the Medical School mailroom, which has been at 333 Cedar Street for close to three decades, has continued the processes set forth by Holland and continues to be a valuable part of that community, processing over 850,000  pieces of mail a year.

In June of 1 992, the central campus mail room moved to 100 John Murphy Drive and Lynne Beauchemin joined the team as and administrative assistant. During that decade, the use of computers grew and with it the rise of email use.  Yale Mail automated its workﬂow and began a mail reduction program and launched its ﬁrst website.

Lynn Beauchemin teamed with George Page and Donald Relihan to streamline all material, update work processes and move forward into the 20th century utilizing technology. Retired now, Lynn Beauchemin remains a key ﬁgure in the department, not only in mail reduction, but also in educating the University about proper mail procedures with mail tips, phone contact and written correspondence.

Upon Page’s retirement in 2 006, Madera took over and is presently still in this position. Under Madera’s leadership, Yale Mail Service has focused on customer satisfaction through a successful customer service program, which meets with University departments, works with USPS representatives, and then communicates its ﬁndings to Mail Service employees to stay ahead trends and on top of any issues.

Yale Mail Service, now located at 344 Winchester, continues to pick up, sort and deliver mail for central campus.  This department of dedicated people often receives positive customer feedback and with its customer service focus and team spirit continues to thrive.