Get to know Yale leaders—Scott Strobel 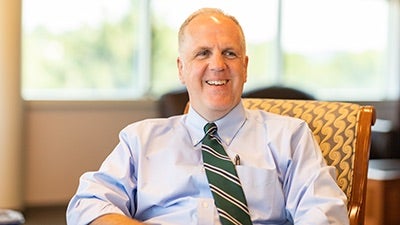 What was the last book you read?
It was actually a book on tape. I listened to Nick Offerman read Tom Sawyer. Offerman’s a gruff character who’s an actor on “Parks and Recreation” and an accomplished woodworker—I saw him on the cover of Fine Woodworking magazine some years ago. Choosing to “read” Tom Sawyer had less to do with the story and more to do with the actor—the folksy notes of Mark Twain combine nicely with Offerman’s Memphis accent. I’ve also read almost all of Michael Lewis’ books, which are about the impact of data on different fields, baseball, stock trading, etc.  The one I’m reading now is “The Undoing Project,” about the impact of data on psychology.

What has helped you develop as a leader over the course of your career?
I’ve had some very good mentors. I had a wonderful graduate student advisor in Peter Dervan at Caltech, who got his graduate degree here at Yale and became a trustee. I learned how to manage a lab from watching Peter, and he has graciously continued to be a mentor to me as a lifelong commitment. When I was a postdoc at the University of Colorado, I was mentored by Thomas Cech, who went on to win a Nobel Prize and become director of the Howard Hughes Medical Institute. Tom gave me such clear guidance as a young trainee.

Is there a favorite place that you’ve found in your travels?
For eight years, I was fortunate to lead a group of undergraduate students to the rainforest as part of a spring break lab expedition funded by the Howard Hughes Medical Institute. We visited Ecuador to hunt for novel microorganisms in one of the most biodiverse places in the world, the Yasuni National Forest on the Napo River in the Amazon.

Possibly the most beautiful place I have ever been is Torres del Paine National Park in Patagonia, Chile. Glacial lakes pour from one to another into massive bodies of water under granite peaks that put the Tetons to shame. It is unlike anything I’ve ever seen and it’s still largely undeveloped. It was like going to a national park in the 1800s, before there were national parks.

What are you most grateful for?
My family. My wife is incredibly supportive of all that we try to do together. We have three wonderful kids who have equally wonderful spouses. And I have three granddaughters, aged three, three and one. They are so much fun! 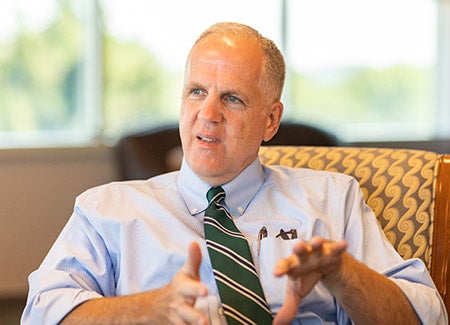 Do you see a connection between your woodworking and your work at Yale?
That’s a really interesting question. When a tree comes down and is lying broken on the ground, it’s essentially unformed and completely nondescript. Through work in the shop, I convert it into something that’s actually valued by people, and is, I think, quite beautiful. Those are the types of projects that I’ve been doing at Yale. West Campus was kind of like raw material. Obviously it had value, but we hadn’t figured out what it would look like; it had to be formed and shaped. The idea of a Center for Teaching and Learning was similar. There were excellent people distributed across the campus but they weren’t connected.

What New Haven restaurant are you most likely to recommend to a colleague?
I often go to Zinc. I love their seared tuna.

Any favorite memories of childhood?
My dad is a scientist at Montana State University, which is where I grew up. He would take me to work in his lab when I was probably five or six years old. He had a crushed ice machine and he would give me a beaker and we would make orange Tang snow cones. Probably not a good idea, looking back at it, but it was a delicious memory. The other thing he would do to entertain me while he worked was to let me play with the lab balance. I started weighing stuff. Eventually, I figured out that the balance could measure the number of grams to the fourth decimal place. I’d take a piece of paper and write my name on it and compare the weight before and after I signed it. I could actually measure the weight of the amount of graphite in my signature. Bottom line is I remember having fun with science.

What was the first Yale tree you used to make furniture?
The first big project that I took on as a woodworker was a walnut tree from the Marsh Botanical Garden. It was the very first tree on campus from which I collected wood. I set up to convert it into a piece of furniture. Eric Larson at Marsh agreed to help me mill it and every weekend for a month we harvested slabs of the wood. It dried under my deck for ten years, and now it’s the dining room table in our house, the mantel on the fireplace, our coffee table, the cabinet in our bedroom, and the table in the office. I purchased a lathe and pretty quickly we had all the walnut bowls we could every want.

Can you say a little bit about the table that sits in the middle of the administrative suite at West Campus?
I built the table from a black cherry tree that grew on campus, and it’s actually become a popular convening spot for the office suite. We all sometimes forget to leave our own offices, and the table is a place where colleagues gather for lunch. Getting to know each other helps in lots of ways. It kind of typifies what’s happening on the whole of West Campus. One of the first investments we made on campus was the creation of the conference center. Now it is a West Campus destination for the rest of the university. People hold their retreats and symposia here all year. It’s also the only spot on campus where you can eat, so it has become a natural convening place with a real sense of community.