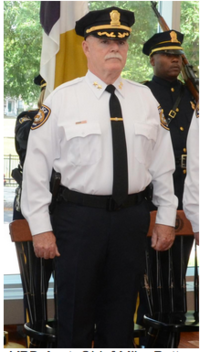 Assistant Chief Michael Patten of the Yale Police Department (YPD) retired last week after 43 years in law enforcement, 25 of those at Yale.  AC or Mike, as he is known by most, started as an officer walking the Timothy Dwight, Silliman and lower Hillhouse Avenue beat.  “Back then in the early 1990s every officer was assigned two colleges. We used to attend the college council meetings,” said Patten.  But he didn’t do that for long, within six months he was promoted to Sergeant and for the next seven years worked midnights supervising a bunch of rookies including one Officer named Ronnell Higgins. “I learned a lot from Mike back then. He’s a great teacher. It won’t be the same around here without him. It is truly the end of an era,” said Chief Higgins.

Patten’s career included leading many aspects of the YPD, he was in charge of the detective bureau just before being promoted to lieutenant in 2000.  Then in 2011, he became Assistant Chief of YPD Operations.  All the patrol officers and emergency services report to him.  Emergency services include the YPD SWAT team, bomb squad, detection dog and hostage negotiators.

Through the years Patten has touched many aspects of YPD’s management including writing general orders, policies and procedures for the department, teaching and training. He volunteered to implement the YPD SWAT Program including handpicking and training the officers, buying equipment and uniforms.  “I’ve really enjoyed the tactical stuff, the honor guard and teaching,” said Patten. In 2001, Patten started and participated in YPD’s Honor Guard, with the help of Officer Charles Hebron, a former Marine, who drilled the guard in proper marching technique.  “People find comfort in rituals, I thought this would be something that would be good outreach for the YPD, so we got involved in parades in New Haven, Yale and beyond,” said Patten. “The original honor guard was scheduled to have their photo taken inside the Yale Irving Gilmore Music Library September 11, 2001. It was never taken.  We don’t have a picture of the original group, felt it would be bad luck.” The YPD Honor Guard has gone on to win several awards.

Patten is retiring but will continue to teach and consult.  He will be greatly missed. “You remember the people that you met along the way and worked with, that is what stands out in your mind.”

Read some wonderful parting words of wisdom from AC Patten.