Built in 1807 by Yale alumni and former U.S. Senator James Hillhouse, the house at 87 Trumbull Street has had a long and interesting history. Throughout the years it has had many uses – recently housing spaces for the Institution for Social and Policy Studies.

Originally located at 28 Hillhouse Avenue, the house was carefully deconstructed in 1871 and rebuilt at 87 Trumbull Street. The University purchased the two-story building in 1926, and that’s where it sat until recently. To make way for the new Economics Building the house was lifted from its foundation and carefully moved to its new location at 85 Trumbull Street. 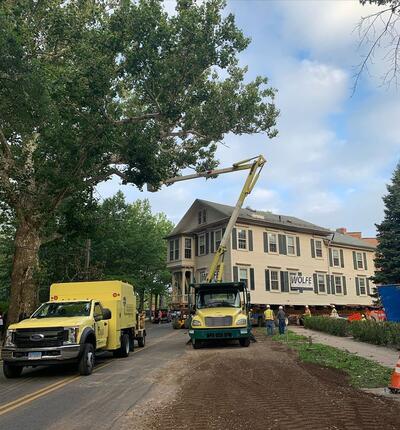 Physically moving the house only took about 3.5 hours but years of work went into the planning. The project began in 2018, starting with the city approval process, including meeting with local historical preservation groups and the New Haven Alders. Members of the Yale Facilities Planning and Construction team who worked on this included: Jim Elmasry, Senior Program Planner, Julie Mangino, Associate Project Manager, and Michael Douyard, Associate Director.

Before the house could be moved, the new location needed a foundation and a planned landscape. Many vendors and engineers – and much coordination – were required before moving the house. David Thompson Architects of New Haven was contracted to design the new foundation, minor modifications to the existing structure, and the new landscaping. As part of the design, the plans also included making the first floor American Disabilities Act (ADA) compliant. “The team took the opportunity to salvage and preserve this building, moving it to an empty lot and improving the Trumbull Street density within the Hillhouse Avenue historic district,” said Jim Elmasry.

Wolfe House and Building Movers of Bernville, Pennsylvania, were hired to lift and roll the house to its new location. Prior to the move, a series of holes were cut into the foundation to support steel beams, including two 65’ beams spanning the house’s length and a dozen 30’ cross beams. The foundation was then demolished and the house was jacked up, allowing space for a platform to be built underneath.

The City of New Haven’s work included shutting the street down and temporarily moving parking meters and light poles. Some sidewalks and trees were removed, that will be replaced, and careful attention was paid to the city’s oldest and largest sycamore tree under which the house had to pass. A whole team of people were on-site the day of the move, including Bartlett Tree Experts, who trimmed some branches from the sycamore tree as the house moved along.

Moving the house 600 feet over started at 7:00 a.m. under clear, dry skies. The house was lowered onto eight robotic dollies that were maneuvered using a proprietary device approximately the size of an iPad . As the structure slowly rolled down Trumbull Street, some street lights and a traffic light were temporarily removed and replaced to accommodate the structure. “We had estimated the whole process taking about 16 hours. But because of all the careful planning ahead of time, we finished in about six hours from start to finish. Our team are now experts on house moving. It was an interesting, unusual, and fun project to work on,” said Julie Mangino.

The site is now clear for the new Economics building – construction is scheduled for Spring 2021. By connecting with two existing economics buildings it will, at long last, bring economics faculty and staff together under one roof. It will also physically connect with the Institute for Social and Policy Studies, creating a new intersection for policy and economics.

This building will also house the Tobin Center for Economic Policy, a new enterprise made possible by Yale’s generous donors. The Center is a vital hub of the university-wide strategy to advance new, policy-relevant research at Yale. By catalyzing new insights and bringing them to the policy arena, the Center will advance better, more effective policies to strengthen families, communities, and the nation.

Big thanks to all who helped with this process!

Watch a time-lapse video of the house move.